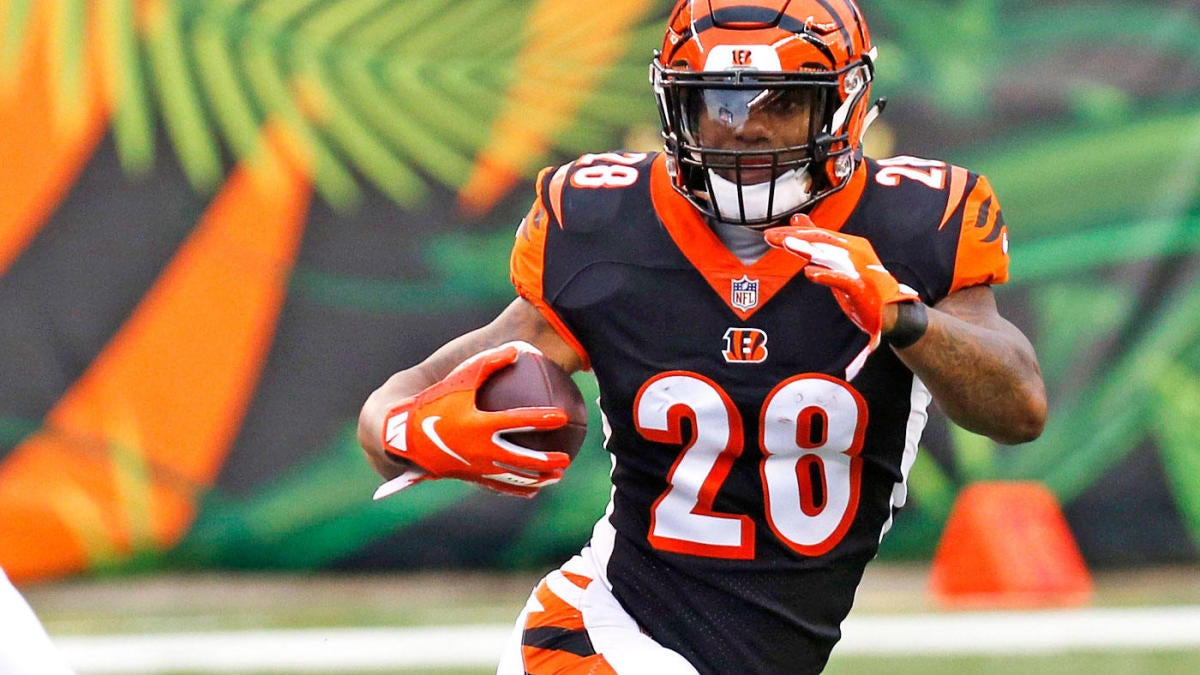 Hello everyone. Dan Schneier (@DanSchneierNFL) here. We’ve gone through week 1 and moving on to week 2. We know some of you are already taking victory laps after some of your favorite drafts have shone in week 1, while others of you clamber to the rejection wire to grab Elijah Mitchells of this world. This play is for all of you – all who play the great game Fantasy football… Each week, I will be putting together the Fantasy Football Today team to answer a group of questions that will help you win the week and ultimately (hopefully) your league. Without further ado, let’s dive straight into:

1. Which player do you regret most about not drafting?

Adam: I would like to have more Kenyan drake… With five hauls at 59 yards in Week 1, he appears to be a passing down. Raiders and Josh Jacobs already wounded. It’s fair to wonder how long Jacobs will be able to hold out with his peat sock, and Drake could face a lot of stress if Jacobs has to miss any time. Even if Jacobs stays healthy, Drake is not just handcuffs, but someone who can be used as a flexible tool in the PPR leagues … I suppose Jalen Richard might eat the role of Drake when he disconnects from IR, but that doesn’t bother me that much.

Dave: Dibo Samuel… I had a chance to face him in every draft since his ADP was low. His target share at week 1 could be a byproduct 49ers start the game while in constant motion, and because of Brandon Ayuk departure. It could end up with a great deal.

Jamie: Joe Mixon… He was impressive in Week 1 with 33 total touches (four catches), 150 yards and a touchdown against good Viking defense. If he can stay healthy and get more than 25 touches a week, then he could make it to the top five in all leagues.

Chris: Joe Mixon. I was very, very excited about Mixon coming this season, and I was ready to draft him in the first stage 1-2 in all leagues. But I only ended up in a few leagues with him, and I should have made it a higher priority. The only problem was that if you draft in the first half of the first round, you need him to slide to 18th or later to catch him, and you couldn’t always count on that. For me, he is one of the four best RBs in the second week.and I think he’s going to have a season of monsters in the role we’ve always wanted for him.

Hit: Mike Williams… His target share of 26% in the first week, coupled with the way he was talked about throughout the offseason, makes me believe in Williams as the # 1 wide-range low-budget receiver. The new Los Angeles offense seems to be more focused on the host rather than the running defenders in the game underway. This shouldn’t have been surprising. Almost all offenses in Nfl are less focused on shooting to runbacks than Anthony Lynn, as revealed in the game plan for the 1st grace week.

Adam: I didn’t paint James robinson in any leagues, but I thought he was the right choice at the end of the 3rd round (after Travis Etienne trauma, of course). Well I can’t help but think Jaguars this season will be a disorganized, illogical, unpredictable mess. Robinson will still be the leader and have some good games, but I don’t see him as an outstanding backward runner. Will it be better than Damien Harris, Chase Edmonds, Darrell Henderson or other RBs that you could do a round or two later? I doubt.

Dave: Jerry Judy… Obvious reasons. I hope Tim Patrick can replace it with Broncos and in my Fantasy lineups.

Jamie: Trey Sermon — now. I have Sermon on several Fantasy teams and seeing him idle like a healthy scratch in his first week in Detroit was a disappointment. I hope with Raheem Mostert (knee) for the season, we can see Sermon in the 49s, and maybe he will turn out to be better than Elijah Mitchell… Hopefully by the end of the season, Sermon will be the best race in San Francisco this year.

Chris: I don’t think there is anyone I really regret, although I don’t quite feel about it. Julio Jones is now in more than half of my teams… Not that I panicked, but week 1 was certainly discouraging. Hope, Titans The line can play better by moving forward because I am still confident in the talent.

Hit: Definitely Mekol Hardman… Patrick Mahomes gave 64.7% of passes to Tyreek hill and Travis Kelsey in week 1 and they made up 89.3% of the team’s air yards. I was hoping that Hardman could absorb Sammy Watkins” but it looks like Hill and Kelsey will take on the role as well.

Please check the consent box to confirm that you want to subscribe.

Thank you for registering!

Keep track of your mailbox.

An error occurred while processing your subscription.

3. Which player will be released in the second week?

Adam: The obvious answer is here: Packers“but I won’t go the easy way! Naji Harris! The Raiders are arriving in town after playing overtime on Monday night and it’s time for new ones Steelers attack to generate some results. I still believe in Harris and would like to buy cheap, but if he fights the raiders, we might be in trouble.

Dave: The Broncos defense is good for holding back the big game and takes short targets. Perfect for Lavisky Chenot. He’s an easy target for the Jaguars to do Trevor Lawrence also more convenient.

Jamie: Havonte Williams could play a big game in the second week in Jacksonville. Jaguars have poor defenses and they just allowed landings against Mark Ingram, Philip Lindsay and David Johnson for Texans… While Melvin Gordon remains the best of Denver’s top two runners (to date), expect Williams to play a big game against Jacksonville this week.

Chris: Naji Harris. If you’re worried about him at all, don’t worry. He only had 45 yards on his 16 carries and only one catch, but he got Le’Veon Bell a treatment in his first NFL game, playing every click for the Steelers. Apparently he’ll probably get some breathing room at some point, but it’s clear that Pittsburgh sees him as a legitimate back that they can lean on, and this will lead to a top 12 exit almost by default, even if it’s a violation not great.

Hit: It should be Naji Harris. He played 100% of the Steelers snaps in Week 1, but due to poor performance he performed poorly. The Raiders’ protection does not provide the same opportunity as Buffalo. Harris is set to return to the top 12 this week at home as the big favorite. Otherwise, his Fantasy managers might start to panic.

4. Which player, brilliant in the first week, is most likely to return to Earth in the second week?

Adam: I will give you three players who will return to earth: Sterling Shepard will be a solid WR3 / 4 this season, but playing big after catching and hitting TD is not really his business. Karim Hunt lucky to score TD in Kansas City but made just 9 touches compared to 17 for Nick Chubb… This is not a general background. Actually I think Hunt could play well against Houston in week two, but eventually the fun will end and you have to see what you can get for Hunt. Jamaal Williams just played his best game of the season (unless D’Andre Swift misses the time). Sell ​​sell sell!

Dave: Josh Jacobs will have a tough fight on the road in a short week. I can’t believe he’ll be productive in Fantasy all week in a row.

Jamie: Corey Davis makes me nervous in the second week because of Jets taking over Patriots… Bill Belichick is notorious for destroying rookie quarterbacks and Wilson’s line of attack is a mess. Davis, who just landed twice against Panthers week 1 is likely to get a lot of attention from the New England aftermarket. I’d be shocked if Davis made it to the top 30 fantasy receivers in any format this week.

Chris: Juwan Johnson… I love the potential he brings to the game as a transformed wide receiver playing tight end, but he was also only the third in the team in snaps. Now he will probably play over 19% of the shots in a game where The Saints he should actually throw the ball, but he will need to grow his role significantly so that he can become an option in starting caliber even in this lean position.

Hit: i don’t believe it Jamis Winston is going to maintain a 25% landing rate this season. And I’m really not sure the Saints will have to throw a lot in their second week match against the Panthers. Winston is likely to throw over 148 yards this week, but bet he will score half his Fantasy points.

5. What’s your boldest prediction for week 2?

Adam: Havonte Williams made 14 interceptions, 82 yards and landed at Jacksonville. I can’t say I have the guts to turn it on because the floor is so low, but I’ve already picked Jacksonville once in this Q&A so I might as well continue. One of the two RB Broncos will play well. Hope it’s Williams!

Jamie: Aaron Rogers goes 400 yards of pass and four touchdowns Monday night against the Lions. This is the perfect setup for Rogers and the Packers to bounce back after being embarrassed by the Saints in Week 1. Rogers will receive two landings from Davante Adams, one touch from Robert Tonyan and one of Randall Cobbwho goes back to doing Lambo’s jump to Green Bay.

Chris: Allen Robinson is going to be WR # 1 this week. I do not have such a rating, but in 6th place it is not far off. V The Bears just couldn’t do anything in week 1 against Baranov defensive front, resulting in Robinson seeing an average target depth of just 1.2 yards across his 11 targets. That said, that target share was still 28.9% and he should be there or near him in a much better confrontation Bengals… He’s about to bounce back with great success.

Hit: Juju Smith-Schuster is border receiver No. 1 wide. Like Harris, Smith-Schuster fought against the bills. But he still had a target share of 25% and looked like a clean number 2 in a pass ahead. Chase Claypool… This type of targeted stake against raiders should give much better results.